Back to Blackburn for powder coat and illumination.  In the films, TIE models look like a grey colour, but it has to be to be obviously Dark Side, so we have a collective ponder and look at the reflection of the Encapsulites on the sculpture’s raw metal. The X-wing was chrome powder coat and it worked really well with the lights. It has to be the same – and has to be consistent with the original Raleigh Record frame.  High gloss black – like Darth Vader’s mask. Looks cool against green. The magazine shoot is booked and I drive to East London. Hopefully you will have read it by now. 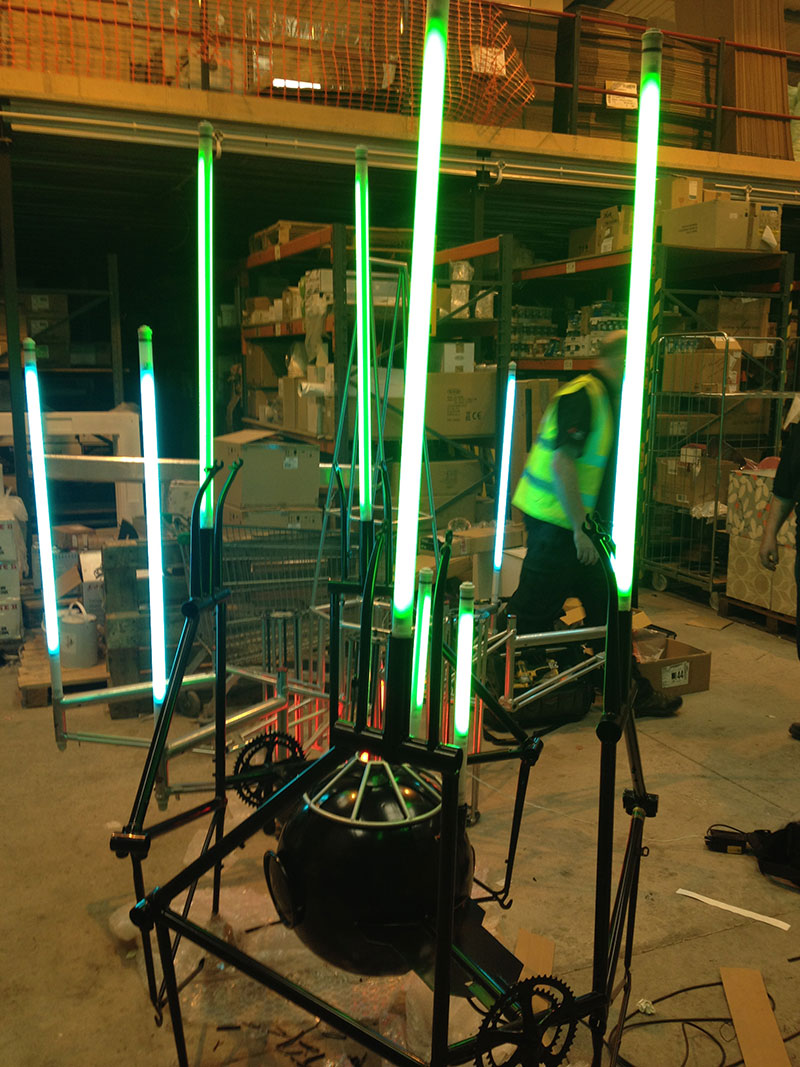 This one gets designed on the fly – straight out of the head and on to the page.  I get a couple of frames into the studio and measure the dimensions to work out how and where to make the cuts to get the shape for the sculpture.  Ben builds the model up pretty much ‘live’ in 3Ds Max as I am simultaneously shifting the frames about whilst blurting out instructions on dimensions, wing rake angles and splicing in other details onto the mainframe, such as re-using sprockets, cogs and forks. It needs a cockpit ball.  It needs to be steel.  And 450mm round.  Tyson’s had been making some cool copper spun hemisphere pendant light fittings.  Can you adapt them? Well, yes.  The dimensions go up to Stuart and two super-size copper and steel ones are hand-spun, sent back down and welded together.   They are just right.

Get back on the bike…

WIRED’s features editor has picked up on the photos and Ben’s blogging and gets in touch to find out who the designer is. We chat and I mention that a second design is partially modelled in the TIE fighter. I let him know that there is a bit of a problem with this one as it doesn’t keep the visible integrity of the bike frames in the same way as the Grifters on the X-wing. They would have to be cut more to make the wing shapes and get a bit lost in translation. I put forward the idea of a Tie Interceptor, which would hold the shapes better and keep proportion with the other model. He agrees. Work starts again for an exclusive shoot for the magazine. It’s another delve into childhood bike nostalgia, so I rack my brains and don’t have to think very far. The Raleigh Record racer. My late uncle John gave his to my older brother years back. It seemed massive to me at the time (I was about eleven) and I kept falling off it – so I had my brother’s hand-me-down smaller Raleigh Olympus. Perfect choice- it was a really large Reynolds frame, so ideal for scale parity with the X-wing. Plus they were black. Come to the Dark Side… Learning from the X-wing, this one would follow a similar path.  So I drive around the Midlands and buy more bikes. They don’t seem to stray far from their home of Nottingham. 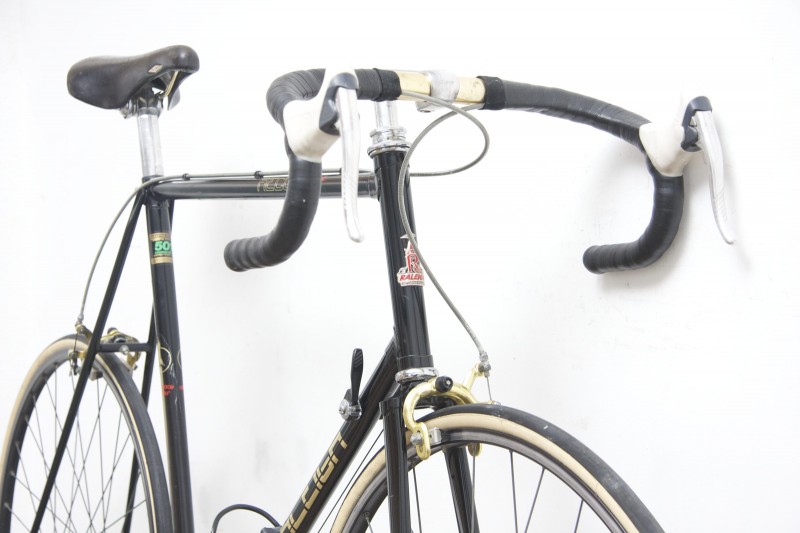 It looks stunning in the darkened vaults of the Truman Brewery on the first day of the SPIN Expo, where it attracts the crowds. I ask mate and photographer, Ollie to come over and do a quick shoot.  He captures it perfectly. Later, it also captures the attention of WIRED magazine. 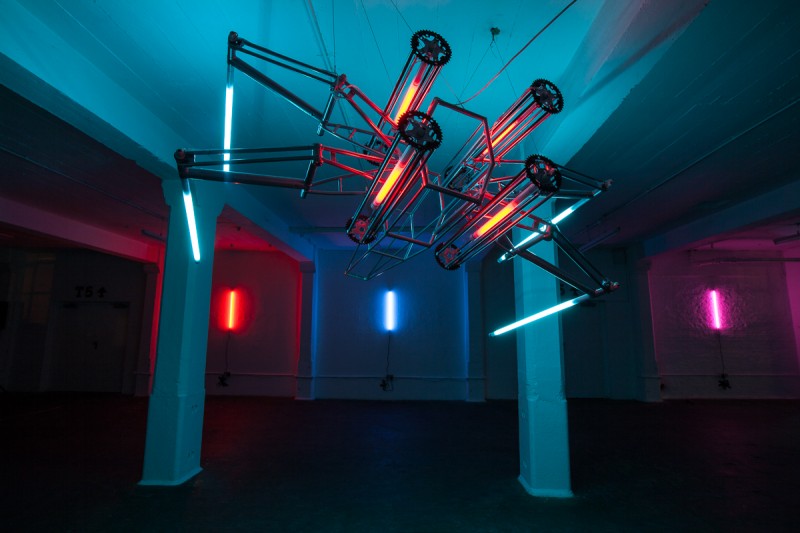 I run it up in the van back to Tyson’s and it’s rubbed, blasted, and chrome powder-coated in a flurry of activity as the clock ticks down too quickly for everybody’s liking before the show. I wanted the spaceships laser guns to look like different coloured light sabres, so it could be very Luke v. Darth when the TIE model was made. Andy’s suggestion of Encapsulites hits it on the money.  They are duly wired in and are both super-bright and super-cool in ice blue.  The red engine burners are a late shout, but complete the picture. It looks real. Ready to go to SPIN. 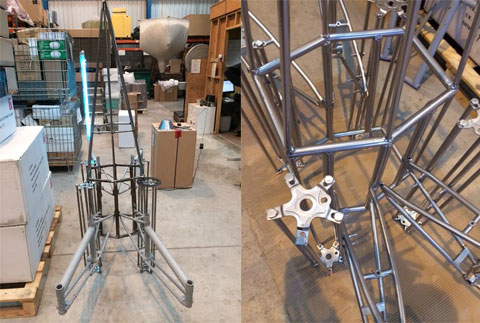 But time is running out. The sculpture needs to be put together.  Pressure on. Mike kindly brings in materials and Matty, to help assemble in their spray booth. Welding goes ahead. Adjustments here and there, but it shapes up nicely. Weekend and a couple of weeknights’ hard work then dispatched back to Tysons. 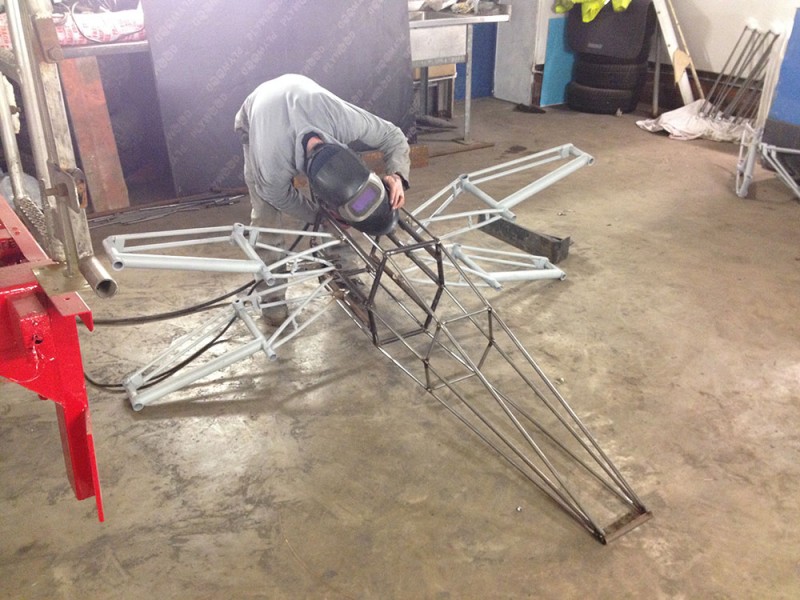 An original Mk1 1977 Raleigh Grifter in metallic blue. Mint. Un-restored. Rare. The bike that as kids, lots of us wanted but never had.  So I relieve it from Richard’s collection. Then drive it up to Blackburn to Tyson’s. Henry gets some accurate dimensions from the bike frame and some scales from a small X-wing model to create some realistic proportions, making a Solidworks cut schedule for fabrication. 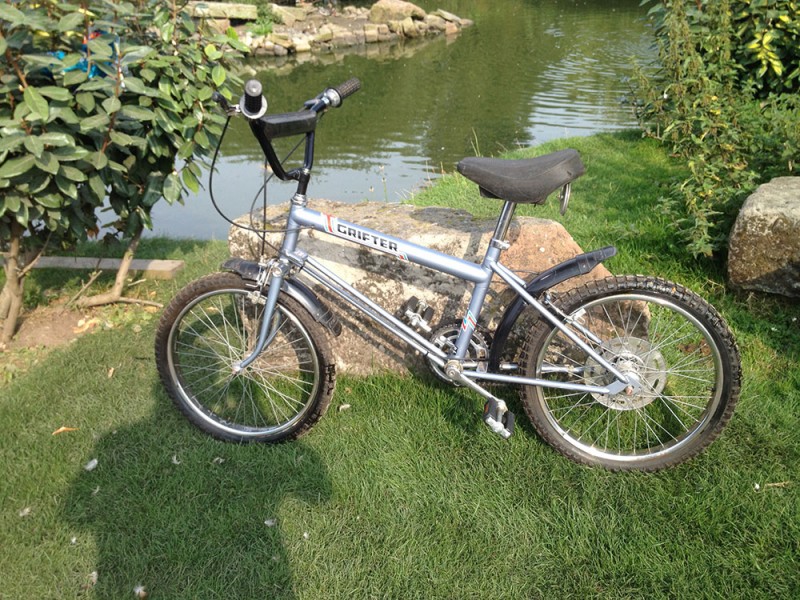 In the dark, but not so satanic mill that is HQ at M1 Studios, Ben, my design intern from Salford University, helps me bring some form and life to the initial ideas.  We look for some BMX and racer frame models in 3Ds Max and some light sabre imagery.  We take a few of days to dimension them out to make visual test models. Some scaling, pushing and pulling needs doing, but they’re really promising.  He Photoshop’s them up in a dogfight inside Petal HQ.  They look cool. I circulate them and yes – they’ve got to be made. 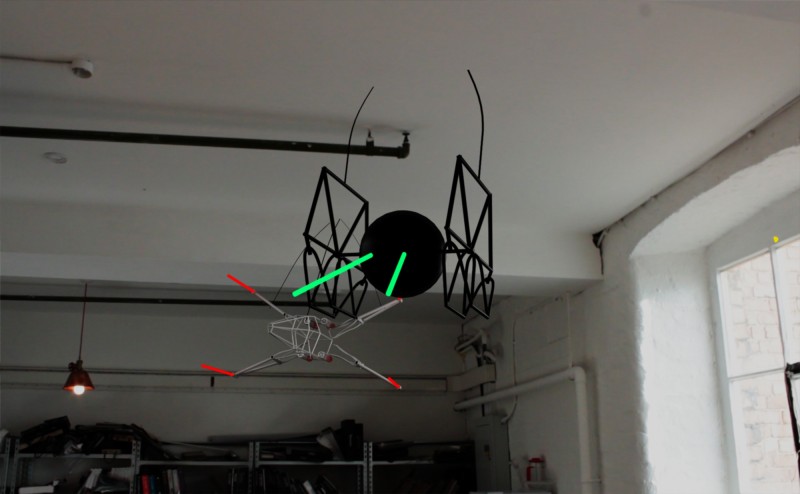 I get to work late that night, rough sketching out the ideas for what becomes the X-wing and Tie fighter (later to become an Interceptor) on the back of a piece of cardboard packaging that I’d received a vinyl album in through the post. Oddly enough, most of the final forms are in there – re-instating Raleigh badges, using cogs for engines, the bike frames, tubing, lasers etc, but its still tatty. You can vaguely make out the words ‘Skywalker’ and ‘Vader’ in my six-year olds’ handwriting. I call my mate Richard the next day – a BMX collector and walking encyclopaedia on anything with wheels on. I ask him which are the most available BMX frames to buy to make a sculpture. He hits the nail on the head. ‘Grifters, Vin. You’ve got to use Grifters. They should be affordable and they came out around the same time as the original film’ The pre-cursor to the modern BMX. Nice one – I owe you. 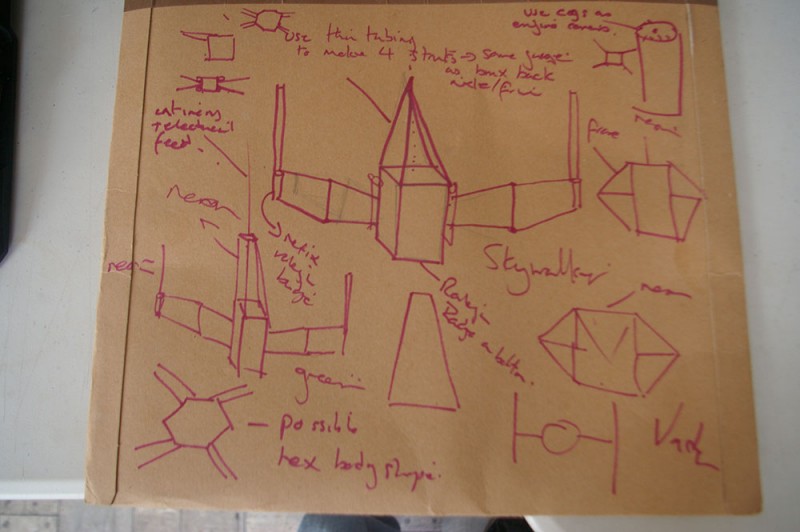 Andy calls me to wish me a happy new year. Neither of us are anything but. Post-festive downers have kicked in on the first day back in work. He’s in a traffic jam near Blackburn and it’s pissing down. I’ve left my home in Middlewich and am stuck in a similar jam in Stockport. And it’s pissing down. After several minutes of sympathetic moaning as the traffic crawls along the A6, he mentions that a guy he knows has asked us to do something for the SPIN LDN cycling expo in London in March. A few ideas are kicked around – then it comes to me. I start disjointedly blabbing at 100mph, which is 99mph quicker than the traffic is flowing. “Bike frames – got to weld a load together – some sort of mad spaceship thing – like a Funkadelic Mothership or something Star Wars-ish – something off its head like that” The idea clicks together quickly but isn’t quite there yet. The downpour stops and a huge rainbow arcs across the leaden skies of Levenshulme.  A divine sign?